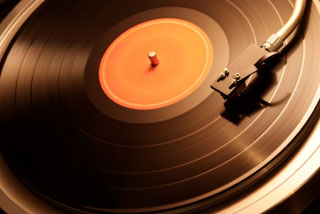 If you have a loft full of valuable well-loved records that you can’t bear to part with, but can’t play on your CD, now might be the time to think about our Vinyl to CD service…

We don’t just transfer the music onto CD; we replicate the sleeves and labels on your album so you have reproduction CDs of your albums that play track by track as your albums did with the benefit of purer CD sound. This is particularly useful if your collection includes records that have never been released on CD. Our mastering techniques preserve the crystal clear warmth that vinyl offers whilst at the same time removing clicks and scuffs that might otherwise interfere with your listening experience.

Gary came to us with an album he and his band had recorded and released early in the 70s but which had long been deleted and, safe to say, had not ruffled the feathers of Slade or T.Rex or troubled the New Musical Express charts. He had one rather beat up record sleeve and one slightly scratched copy of their masterpiece, but after careful planning and high resolution scanning and mastering we were able to produce one copy for each of the remaining band members, and to provide Gary with a master of the CD and supporting artwork should he wish to make further copies.

Richard’s father had died almost fifteen years earlier, and he had no film or recordings of his father speaking, but he came upon a box of Dictaphone tapes in the attic at his mother’s home. He brought these to us, and despite the format being long defunct (last players produced in 1984), we managed to master recordings of almost an hour and a half of dictated messages of his father detailing important letters and ideas to his secretary over twenty-five years previously. He played these to his mother on the occasion of her seventy-fifth birthday with amazing results, and some happy tear-filled moments of unexpected memories.

Christine’s grandmother, aged 94, had been a successful singing artist in her early twenties, recording many records on 78 (shellac brittle ten inch discs) in the 1940s when in her twenties. Using our archive access to recording libraries and a few inspired phone calls and web searches, we helped Christine locate two original 78 records from her grandmother’s original output, and provided her with a portable 78 record player that we showed her how to use. The result was that she was able to provide her grandmother with recordings of her voice from seventy years earlier, and her mother with an insight into her own mother’s career that she had yet to experience. It was an amazing day that we were delighted to have been able to help her celebrate.

We also offer a cassette and reel to reel tape to CD service to preserve valuable archive recordings. These can prove an ideal and inspired birthday present for older relatives who can be reunited with memories they haven’t enjoyed for some time.

We are at the other end of the email just waiting for your suggestions and ideas, and will be happy to help you put together something special to preserve moments from the past forever. There is no obligation to follow through, and no charge for estimates. Drop us a line now!